What this post is about — In my last post, I promised to share some recipes wherein freshly made, whole milk paneer (cottage cheese) can be substituted for feta cheese. I plan to do another series of more elaborate recipes in the coming weeks, but for now, these three simple ways to use paneer feta are fun, innovative and so delish! 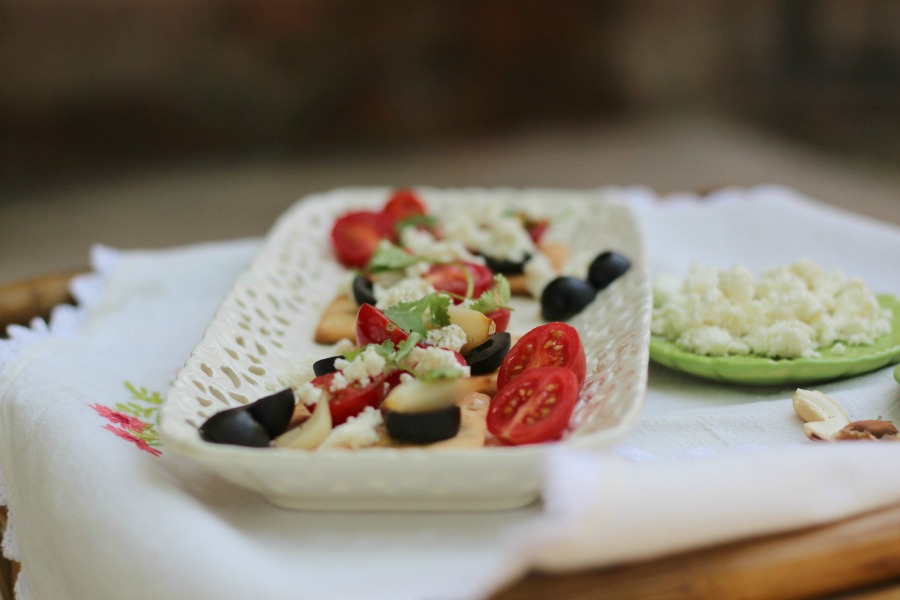 Why Paneer, or why not?

I have never been a big fan of paneer and I can’t believe I’m doing a post dedicated to this ingredient on my blog today! Although I have attempted to fall in love with paneer by using it in alternative, innovative cooking — like chilly paneer baby samosas, achaari paneer-stuffed breakfast buns, and pizza-flavoured paneer mini pies – I have never been able to hero the ingredient adequately or place it on the podium of more-ish cooking.

Recently though, my dearest mother (the best cook in the world, as most of my friends will agree) rediscovered the use of paneer as a poorer cousin of the salty delight — feta cheese. She attempted a summer watermelon salad emulating paneer as feta. And when I tried the recipe myself, I WAS SOLD. So I started experimenting and recipe testing with my new-found admiration for the characterless paneer.

In the past one month, this ingredient has dominated my kitchen counter and I can’t wait to share with you some really fun, classy, and aesthetic ways to use paneer feta (that’s what I’m calling it).

How to make Paneer Feta?

Bring 500 ml of full cream milk to a boil and turn off the flame. Add a few drops of juice of lime to split the milk. Keep adding the lime till the milk and cottage cheese have completely separated. Strain and allow the liquid to drain. At this point, do not set the paneer into a block, instead allow it to remain soft, creamy and a bit wet. Use freshly made paneer feta for all of these recipes (not refrigerated from the previous day, as that will change the consistency of it).

Method
In a small bowl, dissolve some salt, pepper and sugar (as per taste) in the juice of half a lime. Place the watermelon and mint leaves in a large bowl. Toss it in half the dressing. Now add the paneer feta on top and garnish with the toasted nuts. Drizzle the rest of the dressing and gobble up immediately.

Method
Place the sliced potatoes and garlic cloves on a baking tray. Drizzle with olive oil, season with salt and ground black pepper and throw in some fresh or dried oregano. Bake in a preheated oven at 180°C for 30-40 minutes till the potatoes are golden and the skins crisp up. Allow to cool slightly on a wire rack.

Sour cream assembly — In a small bowl, mix together some single cream, salt and pepper to taste, a few drops of Tabasco sauce (not too much as this may split the cream) and some chopped coriander leaves.

Final assembly — Place some paneer feta on top of each potato slice. Garnish with sliced jalapeno, pomegranate seeds and fresh coriander. Drizzle the sour cream over the top of the assembled potatoes and there you have it! 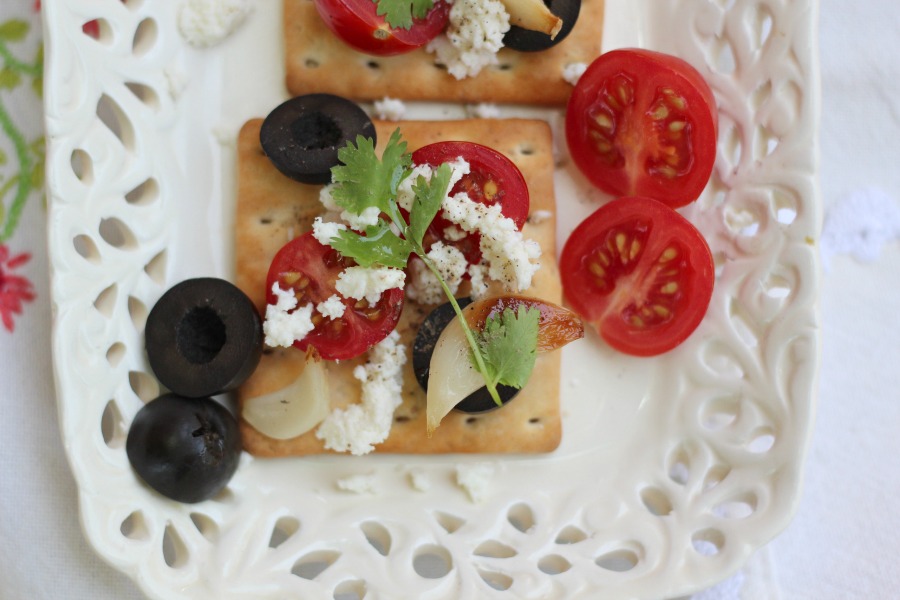 Method
Dressing — In a small bowl, mix together 1 tbsp of extra virgin olive oil with salt, ground black pepper, a pinch sugar and juice of lime (as per taste).

Roasted garlic — This can be made previously and refrigerated. Place 2 whole pods of garlic, roughly smashed, with peel, on a baking tray. Drizzle with some olive oil, salt and pepper to taste, and throw in some thyme sprigs. Cook in a preheated oven at 180°C for 25-30 minutes or until the garlic is soft and tender. Allow to cool on a wire rack, peel and keep aside. 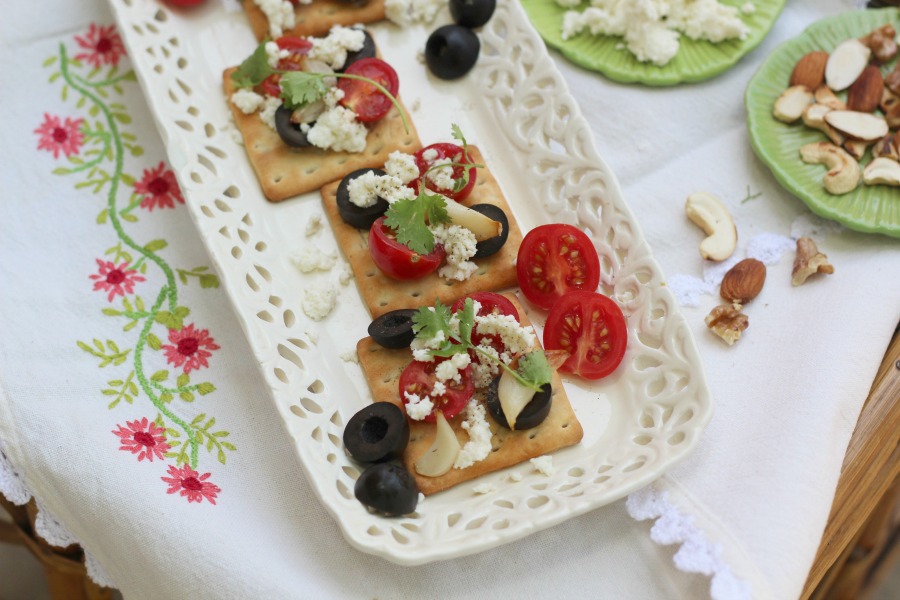 Assembly — Place the crackers on a tray. Place the cherry tomatoes, olives, and roasted garlic aesthetically on top of the crackers (Alternatively, the crackers may be topped with an olive-tomato salsa, see my recipe here). Sprinkle some paneer feta on each cracker. Drizzle some dressing over it. Garnish with a sprig of fresh coriander. And voila!

I really do hope that these super easy recipes will encourage you to use traditional Indian ingredients in some unconventional cooking and innovative flavour palates. I would love to do another series of recipes with paneer feta (want to include something sweet in it) if that is something you guys would like to see. Let me know in the comments down below!

Thank you for being such a powerful source of inspiration to me (and my cooking). Absolutely need to thank hubs and my two-year-old for being my recipe tasting guinea pigs. Actually, they will eat anything you know; so I’m not really sure if their judgement can be trusted! Well, you guys can tell me what you think! 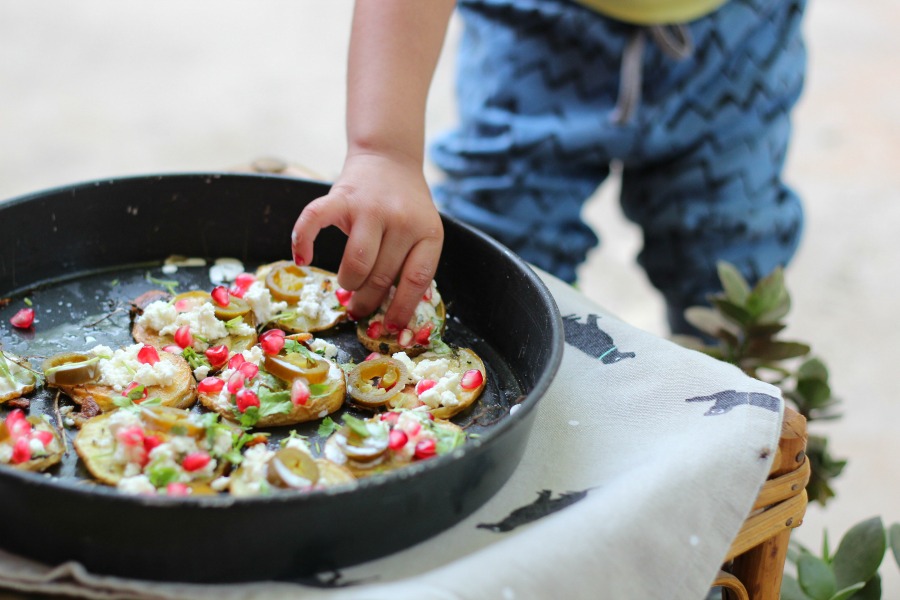 Until next week, cook with all your heart and all your senses! XOXO